Last fall I entered an essay contest sponsored by a well known magazine. The task was to answer the question: When did you first understand the meaning of love?  I wrote about  my grandparents.  I had forgotten about the contest, but I happened to be thinking of my grandparents a lot this week.  We said good bye to Nanny four years ago yesterday, and to Grandpa nine years ago this coming Sunday.

I checked out the contest details and learned that the winners were chosen last month, and while I’m assuming I didn’t win the contest (or I would heard about that $3000 prize by now),  the lesson learned is, as they say at American Express….priceless.

A Seventy Year Example of the Meaning of Love 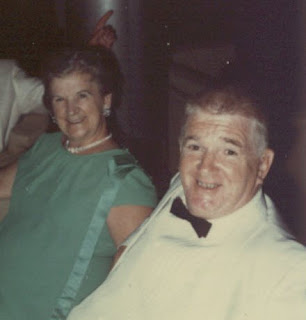 I can’t think of two better teachers of the meaning of love than my grandparents, Agnes and Vance Hallett.  It was their example growing up that left a lasting legacy. Their story, or at least it’s beginning, was a bit atypical for the 1930’s.
My grandmother, Agnes Wilson (known to us grandkids as Nanny), was kicking up her heels dancing the Charleston in the 1920’s when she met the dashing Sam Fulton, of the steamboat Fulton family fame.   They fell in love, married, and as would be expected of them, quickly became pregnant with their first child.
Only three months into Nanny’s pregnancy, Sam was stricken with the Swine Flu and died on Christmas Day.  That left Nanny widowed, pregnant, and forced to continue working in her father’s grocery store. Today a single working mother is to be applauded, but in the early 30’s it was a rare anomaly.
Love is being overwhelmed, but moving forward anyway.
Ask any single mom today and they’ll also tell you the situation is not necessarily a magnet for eligible men. But that didn’t deter Dudley Vance Hallett (Grandpa to us, Vance to his wife), from courting, falling in love and marrying Nanny. Originally from West Virginia, he was a hardworking  steel mill worker living in a nearby  Pittsburgh neighborhood.  He raised her son, Sam Jr. as his own and their family grew welcoming two more children Carolyn and Tom ( my dad).
Love is choosing to take a risk.
It was a risky choice, not just because he was taking on a ready made family, but also because Nanny’s Catholic upbringing did not meet the approval of Grandpa’s Protestant family, not to mention that she was an older woman.  Scandalous indeed.  He would not let that come in between the love for his new wife, and ties to the Hallett’s slowly evaporated and I never came to know anyone from the Hallett clan, except for Grandpa’s brother Pete who kept in touch.
Love is choosing to love someone and loving the whole deal.
Growing up I never once heard my grandparents argue, raise their voices or criticize one another.  Instead I recall them sitting close and always holding hands.  Grandpa was hearing impaired from birth, so Nanny patiently repeated things slowly and quietly to him so that he could read her lips and know what was going on in the conversation around him.
They faced the usual trials and tribulations of buidling a life together, raising a family, and perservering through hard times.  They supported each other through the unexpected deaths of their infant daughter, Mary Ann, and then their youngest  child (my father) Tom, at the age of 52, not to mention of the loss of  several siblings, relatives and friends.  They endured these obstacles with a supportive strength for one another and without blame or judgement.  They coped as they always did, quietly holding hands.
:Love is unconditional.
As often happens, they were eventually forced to leave the home they loved and relocate to an Assisted Living Center in another state,  close to their daughter and more accessible to family.  They adjusted slowly and held one another up (both literally and figuratively).
Love is patience, devotion, affection.
After seventy years of marriage, Vance died at age 93, and five years later, Agnes followed at age 102.  These days with divorce rates soaring over 50%, and even statistics for second marriages even more grim, a seventy year marriage is a rare gem.  It is a without a doubt a celebration of the meaning of love.
Love is awe inspiring and occasionally jaw dropping.
I am honored to have been a witness to the example of the love of Agnes and Vance Hallett because I believe  their lives held all of the essential elements in a lesson plan on love. It helped me to understand the meaning of love and to know that lasting love IS possible.  But even more, I believe their journey was a lesson to everyone whose lives they touched.
Love is, and always will be,  my grandparents.
Previous Post: « Stripping down…care to join me?
Next Post: Kristen vs Garage Door »