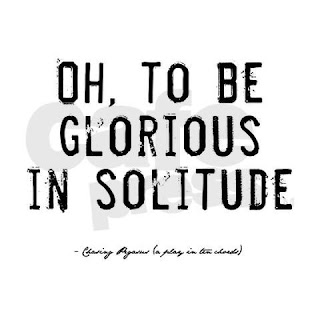 Last night was unprecedented. Not just because I didn’t have any plans or commitments, that happens even though I know some of my friends don’t believe it.  But because I had the house to myself. I mean totally and completely to myself.
Rich and Megan headed out for an overnight outing for college orientation. I’m the traveller In the family, There have been many times I’ve been away overnight, but the reverse has never happened in my almost nine years of marriage.
I’ve never been very good at entertaining myself. As a kid even when I played Barbies I was itching for my neighborhood gal pals to come over to join in the fun.
I contemplated calling upon my gal pals (the grown up version) to see who was up for a cocktail. When I first learned the dates of orientation I even considered hosting a girl’s night (kinda like when your parents would go away and you’d have a party). Of course there were plenty of chores to be done, work to finish, and preparations for my upcoming trip to finalize.
I opted for none of the above.
I donned my pj’s, poured myself a glass of wine, and tucked into my latest Netflix, something that Rich would never want to watch. It was all quite reminiscent of my single days.
The house seemed eerily quiet, but I did find the solitude more soothing and enjoyable than I did in my Barbie playing days. Not only have I gotten better at being alone, I sometimes even crave it, and I recognize how essential it is for my well being, for balance. I’ve also discovered over the years that being alone doesn’t mean lonely.
Even so, I’ll happily go back to sleeping on my side of the bed tonight.
Previous Post: « Creating a new habit
Next Post: Best foods for your adventures and workouts »