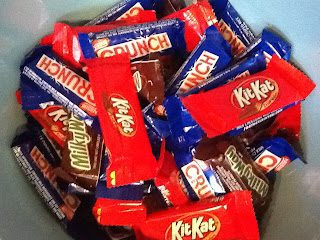 Ok, it wasn’t really that bad. But the Charlie Brown Great Pumpkin episode did come to mind last night as I enthusiastically awaited the trick or treaters whose Halloween plans were thwarted in Norwalk by the unprecedented fall snow storm last weekend.
The porch lights illuminated the pumpkins, the Pandora Halloween station was cranking. Did you even know there was such a station? Although after we got through the obligatory Monster Mash and Thriller, the selections were a bit of a reach.
We were assembling homemade pizzas and I had my glass of wine in hand, while Rich was working on the last of the fall ale.
Then, crickets.
I double checked the porch lights.
I shuffled up the candy bowl to ensure that all three selections were easily visible.
Nothing.
I must be honest, Halloween isn’t my favorite holiday. I think it goes back to the year my grandmother (many of you knew her as Dolly) made me dress as a tree for Halloween, despite my adamant protestations and desires for less brown and more pink, ideally something involving tulle.
Instead I had a bird’s nest fastened to the top of my head.
Not nearly as cool as a little bling.
I was, however, ready to embrace it this year. Celebrate it.
In the end only three small groups of determined trick or treaters made the trek to our doorbell.
Sometimes you just have to go with the flow….so, I kicked back and ripped open a bite size Milky Way (or two) as the One-eyed Purple People Eater played on Pandora.
Previous Post: « Don’t waste the sexy
Next Post: The riskier the endeavor, the more exhilarating the reward »